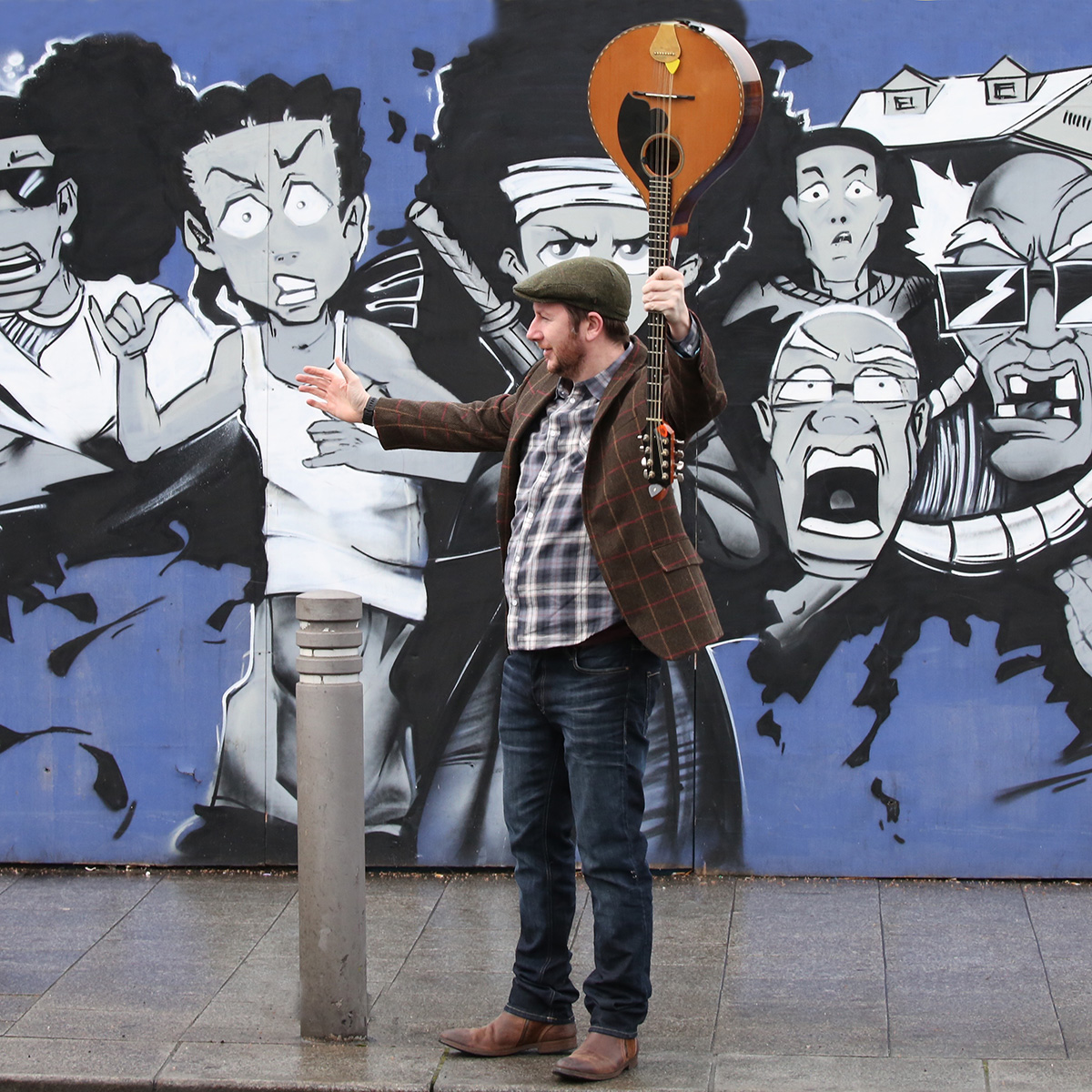 ‘I’ve been listening to Daoirí’s emerging sounds since first hearing him at the Góilin Singers Club in Dublin when he was a young lad….always a treat to hear him sing.’
Christy Moore

'It doesn't get much better than that. The real deal. What a voice.'
Mark Radcliffe, BBC Radio 2 Folk Show

‘Daoirí played for ninety minutes. Watching, caught in the enthralling flow of the music, it felt like twenty.’ Live review by From the Margins

Dublin-born traditional singer and bouzouki player Daoirí (pronounced ‘Derry’) Farrell has been described by some of the biggest names in Irish folk music as one of most important singers to come out of Ireland in recent years.

After a promising debut album, The First Turn, back in 2009; Daoirí spent several years studying traditional music and performance across Ireland. While at The University of Limerick Fintan Vallely introduced him to the singing of the late Liam Weldon, an encounter that was to prove formative to his sound and his approach to folk song.

Daoirí had cut his teeth as a singer in Dublin’s famous Góilin Singers Club and at other sessions across the city, many of which he still visits regularly. Following his studies he quickly found work accompanying artists including Christy Moore, as well as a list of names that sounds like a who’s who of folk music: Dónal Lunny, Martin Hayes, Dennis Cahill, Alan Doherty, Danú, Dervish, Julie Fowlis, Arty McGlynn, The John Carty Big Band, Kíla, Sean Keane, Gerry O’Connor (Banjo), Gerry O’Connor (Fiddle), Lynched and more. In 2013 he won the All Ireland Champion Singer award at the Fleadh in Co. Derry, and in 2015 won the prestigious Danny Kyle Award at Celtic Connections in Glasgow with the line-up FourWinds.

Daoirí finally stepped into the limelight launched his own solo live career at the 2016 Celtic Connections.

His determination not to put out another album until he was sure it was the best he could produce, means the long-awaited release of True Born Irishman in October 2016 was hugely anticipated. As the final touches were being made to the album, and as a relative unknown to the UK audience, in May 2016 he was invited to fly to Manchester to do a live session on the BBC Radio 2 Folk Show with Mark Radcliffe. Two UK tours and UK festival dates followed in 2016 including Moseley Folk Festival, Broadstairs Folk Week and FolkEast.

Calls were coming in from across the world and dates were put in place in Australia, Canada, Belgium, Denmark and more for 2017 alongside a co-headline tour with 2016 BBC Radio 2 Folk Award nominee Damien O’Kane, who contacted Daoirí online after seeing a video of him on Youtube. The video which Damien O’Kane spotted was of Daoirí’s live performance of Creggan White Hare from The First Turn which has quietly reached over 1m hits (now standing at 2.2m as of Sept ’20).

What the press said about True Born Irishman:
‘On only his second solo album this former electrician surely steps into Irish folk legend….Put his ferocious and dramatic version of Van Diemen’s Land against the pitiful U2 Rattle And Hum rendition and the depth and intensity of Farrell’s art is clear. Bold and Undeniable.’ **** Daily Mirror
‘It’s not hard to understand why the mighty Donal Lunny has championed him…An album that could yet prove to be one of the most significant Irish releases of recent years.’ **** Songlines
‘True Born Irishman is definitely one of the year's outstanding Irish music albums; you owe it to yourself to hear it.’ Fatea
‘Farrell has created quite a buzz in Ireland…it’s easy to hear why. His powerfully unadorned vocals might be from any era, variously recalling Paul Brady and Andy Irvine…it’s a powerful statement.’ **** Mojo

In February 2017 the BBC announced that Daoirí Farrell had received three BBC Radio 2 Folk Award 2017 nominations – more than any other artist that year. He was subsequently asked to perform at the awards ceremony on 5th April at The Royal Albert Hall – broadcast live on BBC Radio 2 with highlights on BBC4 TV and went on to win the Horizon Award for best newcomer and Best Traditional Track Award for Van Diemen’s Land from the album True Born Irishman.

His third album ‘A Lifetime Of Happiness’ produced by Dónal Lunny was launched on 15th February 2019 with a sold out show at Dublin’s legendary An Goilin Club. Reviews confirm that this is yet another leap forward for Daoirí:

‘Direct vocals of persuasive clarity, instrumental arrangements of real verve, an appealing openness in his performance and a clear passion and understanding of a song’s narrative. It’s been said before but it’s difficult not to evoke some of the great names of Irish music…when discussing his work.’ Colin Irwin, fRoots
‘Daoirí Farrell is singlehandedly spearheading a resurgence of the authentic in Irish folk music…he is rightly in demand all over the world. A truly timeless album.’ Irish Music
‘Daoirí’s singing is outstanding by any standards; stylish and absolutely riveting… this album is nothing less than a quintessential Irish folk album, the heartfelt, pride-and-passion expression of a collection of classic songs, and as such is unlikely to be bettered this year.’ FATEA
‘Just occasionally you come across a singer so talented, so natural, that you feel you might as well give it all up and just listen in awe. Such a one is Daoirí Farrell….You may notice there’s no criticism in this review.’ Living Tradition

As Lockdown hit Ireland in March 2020, Daoirí responded with one of the earliest live streams, performing from the ‘Covid Corner’ of his kitchen on St. Patrick’s Day. The response to the broadcast was overwhelming with more than 15,000 views and many, many requests to repeat the concert. What followed were twenty-five consecutive concerts, every Sunday night at 10pm, live streamed across the world and attracting audiences from Australia, the USA, Canada, Europe and more with 5,000-9,000 views each week. His shows made the news around the world and as a result he was invited to co-host the BBC’s Folk Show with Mark Radcliffe and on 4th May 2020 he performed on BBC Radio 4’s Today programme. The Today programme has an average weekly listening audience of 7 million listeners.

A TV special featuring Daoirí and Seamie O’Dowd aired on Irish TV station TG4 in early 2022 as part of the Session sa Black Gate series. The programme can be viewed here: https://bit.ly/3oRUqBV

Daoirí’s fourth album, ‘The Wedding Above In Glencree’, recorded with Trevor Hutchinson from Lúnasa/The Waterboys with the support of the Arts Council of Ireland, is released in late February 2023.